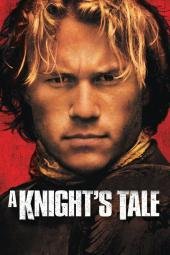 What Parents Need to Know

Parents need to know that A Knight’s Tale is a 2001 medieval movie in which a man born a peasant sets out to prove that he’s worthy of being a knight. There’s frequent jousting and sword-fighting violence: Characters fall off horses, sustain severe bruises, some blood. A man is shown hanging dead from the gallows. As the quest begins, a naked man suddenly appears and walks past the knight-to-be’s entourage; brief male nudity (buttocks). There’s some sexual innuendo: talk of breasts, a mention of having “uncrossed her legs.” Some language occurs: frequent use of “s–te,” the UK variant of “s–t.” The word “fonging,” used frequently by one of the characters, can sometimes mean beating someone up, but in other contexts it has an “F” word connotation. There are some modern nods throughout the movie, primarily in the form of classic rock songs like “We Will Rock You” and “The Boys Are Back in Town,” but this nod to modernity takes a turn into product placement territory when the blacksmith of the group, upon giving the knight his newest armor, distinguishes it by carving swooshes that look like the Nike symbol.

Heath Ledger plays William Thatcher, a knight’s squire who steps into his liege’s armor when the knight is killed in a jousting match. All he is thinking of is winning the match so that he can get some food for himself and the other two squires (Mark Addy as Roland and Alan Tudyk as Wat). But once the armor is on and the lance is in his hand, his childhood dream of being a knight is awakened, and he persuades Roland and Wat to help him pretend to be a nobleman so that he can continue to compete.

Is It Any Good?

This is Ivanhoe crossed with Rocky for a new generation, and it’s great silly movie fun. Of course William meets a beautiful princess (Shannyn Sossamon) and an arrogant champion who competes with him for the princess and the title (Rufus Sewell, wonderfully brooding as Count Adhemar). The secret of William’s low birth is revealed at the most dramatic moment. But there’s a happily-ever-after ending that is just right for this fairy tale. Ledger holds his own well in his first leading role, and Paul Bettany is completely winning as Chaucer, who may have a gambling problem but who knows the value of words. Sossamon, in her first role, is pretty but unimpressive. The art direction sets the scene beautifully, and, if you’re willing to give it a chance, the music works very well, especially in a dance sequence that shifts about 600 years into David Bowie mid-step. If Bachman Turner Overdrive had been around in the 1400s, they would have played “Taking Care of Business” during combat.

If the idea of a medieval jousting movie set to classic rock songs like “We Will Rock You,” “Low Rider,” and “The Boys Are Back in Town” bothers you, forget A KNIGHT’S TALE and rent Ivanhoe instead. But if the idea appeals to you, get some popcorn and get ready for a ravishingly good time. In other words, leave skepticism behind, and it will rock you.

Talk to Your Kids About …

positive elements: It’s a good-hearted flick full of likable characters, especially the ragtag band of friends willing to humbly support William’s ambitions. They teach him to joust. They teach him to dance. They sew clothes for him, make armor for him and collaborate on a romantic letter of apology for him. That camaraderie gives this jelly donut of a movie its sweet center. The idea that people can rise above social status and achieve great things also takes the fore. William allows an opponent to lose in a dignified manner. Evil Count Adhemar is merciless, in sharp contrast to the sportsmanship and compassion displayed by William (they vie for the affections of Jocelyn, who notices this disparity in character and gives her heart to William—the true “noble” man). William and his friends adopt into their clique a female blacksmith shunned by the men in her profession, and proceed to treat her with respect. Although pal Chaucer is humorously portrayed as a chronic gambler, his misfortune and self-proclaimed addiction clearly show the down side. When William eventually reunites with his aging father, their loving commitment to each other makes these peasants seem richer than the finest-dressed lord (he proudly chooses to joust under his family name in the climactic contest). Nobility is not a birthright, but a matter of the heart.

Even so, the best moment in A Knight’s Tale could prove to be the year’s best moment in film, period. [Spoiler Warning] Just before his final showdown against Count Adhemar, William’s true identity comes to light. The jig is up. He receives warning that he has been disqualified from the tournament and will surely be arrested. His friends tell him to hightail it into the woods. Even Jocelyn promises to escape along with him. William refuses. “I will not run!,” he shouts, willing to accept responsibility for his actions and endure public disgrace in the name of honor. Wait, it gets better! Placed in a pillory, William is scorned and condemned by angry townspeople. All is hopeless. That is until the heir to the throne of England strides up. The prince, who had been shown mercy earlier in the film by William, does what only a man of his virtue and authority could do. He pardons William. Not only is the young man released, but he is given a title of nobility contestable by no man. It is a fantastic, human illustration of mankind’s redemption by Jesus Christ. Unable to escape sin, we all face judgment and humiliation at the hand of our accuser (Satan). There is absolutely no escape apart from a royal pardon by the only person with the authority to release us and call us holy—Jesus. Despite some disappointing content (below), this film offers mature viewers an outstanding vehicle for discussing the Gospel with unsaved friends.

spiritual content: While not overtly spiritual, a pivotal scene models Matthew 5:7 and demonstrates God’s redemptive love for humanity. Several casual mentions of Christ are reverent. At one point, the camera strolls past a man on the side of the road preaching about Peter’s denial of Jesus. Sadly, a few other characters—ignoble foils—model a faith steeped in piety or oppression. The line, “If a man believes enough, he can change the stars” gives a subtle nod to astrological predestination.

sexual content: Nothing explicit, though a conversation amongst William’s friends deals with the beauty of a Jocelyn’s breasts (which are exposed just a little too much in one outfit). Prolonged shots of Chaucer’s bare, filthy backside aren’t sexualized, but neither are they necessary (gambling often results in his losing his shirt … and shoes … and pants). The film’s most disappointing element actually appears in the TV commercial—an implied night of passion between William and Jocelyn (she enters his bedchamber, they kiss and the scene fades). Also, while most of the modern music grafted into this 94-minute renaissance festival won’t offend, the song chosen to usher in the end credits will: AC/DC’s bawdy anthem “You Shook Me All Night Long.”

crude or profane language: Fewer than 10 profanities mar the dialogue, including about four variations on the s-word.

drug and alcohol content: Some beer and wine, but no drunkenness.

conclusion: Commenting on the film’s quirky clash of pop cultures, Brian Helgeland told Entertainment Weekly, “When we tested it, most people dug it, but the people that didn’t like it really didn’t like it.” What’s likely to turn off discerning viewers more than those clashing cultures are several unfortunate moments that have the impact of a lance’s glancing blow to the shoulder—not enough to knock you off the horse, but still wince-worthy and regrettable. On the other hand, what’s good here is very good—a cheery, clever romp with lots to discuss.